The Massachusetts Department of Public Health launched the Healthy Behaviors Campaign to encourage open communication around issues of sexuality between young adults and between parents and children.

After performing extensive research we produced radio spots and print materials in English, Spanish and Portuguese. The Media Campaign was launched in January 2002 on statewide mainstream and Spanish language radio stations and transit systems. A package was developed for use in clinics, which included posters, postcards and display easels.

A comprehensive package was developed for use in clinics, which included posters, postcards and display easels. A Marketing Plan was developed for family planning providers to further extend the reach of the campaign. It included information on how to work with local media and how to adapt the campaign’s products for a variety of circumstances.

Have You Talked? (English)

You two have a lot to talk about! 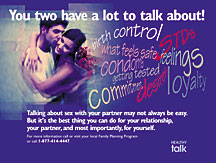 Transit Card and Posters. Magazine and Newspaper Adertising.
Produced in English and Portuguese

Talking about sex with your partner

Transit Card and Poster
Produced in English, Spanish, and Portuguese